we all have a Path,

which unfolds in our life 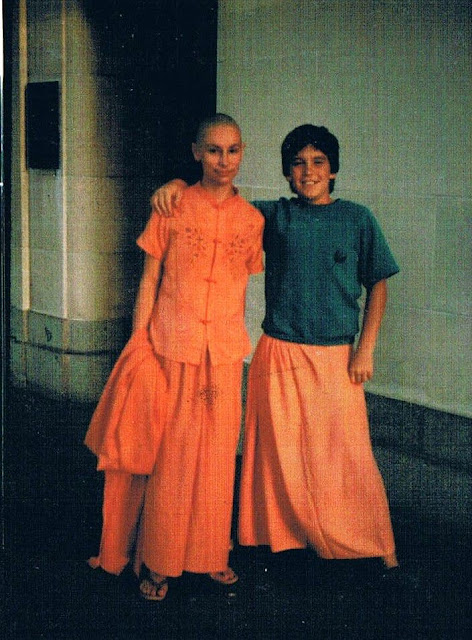 So long ago, in my Ashram years. With my son. It feels like another lifetime. I'm wearing a dyed chinese shirt that I had before my Ashram years. And our dhotis are calico, Stiff and heavy, dyed with Dylon 6. There was very little money for anything. Flip flops all year round.

About our Path - of course, I had one too.  My journey in Life. Just as we all have. I suppose that one could say that we choose, we decide, but in my case? Um, no. It all just unfolded, and pushed me into doing what I was supposed to do. Not that I always wanted to do whatever it was, that I just knew I should be doing.

I understand this all of this destiny business much more now than when I was younger, partly because of my own experiences, but also through being a clairvoyant, and healer.

what I'm supposed to do as my Path, starts to unfold

Firstly, I became a yoga teacher. How I came to yoga was a fluke, really. I was recovering from birthing a large (for little me) baby, so I went to keep fit classes to get my strength back. I hated them.

Mum rang me and said to go to yoga - neither of us knew what that was, but Mum didn't often give me advice, so when she did - I listened. I loved my first class so much, even though I was very clumsy and uncoordinated. I went every week, all year long. I am still massively influenced by what I learnt from my first ever yoga teacher. He was seventy-eight at the time, and none of us could keep up with him. Within two years, he had pushed me into teaching a class each week.

Another five years passed, with me still regularly going to yoga classes each week. My marriage ended, and five months later, I saw a poster advertising a swami taking a weekend course in the Waitakere Ranges, in Auckland. I didn't know what a swami was. I knew that they were involved in yoga, and wore orange. And were generally (at that time) an Indian male. I had only ever met one before.

I got offered a ride with poster swami and his entourage. (That organisation was big on entourages, as I found out over the years). Of course, I said and did everything wrong in the car, and during the weekend. As you do.

Seven months later, I went to said swami's ashram, in Australia of all places (that style of yoga was big there), and to my surprise, he initiated me as a swami. Which was immediately followed by years of hard and intensive 24/7 yoga training. And it has been very rare to get this in the west since the late 1980s. So many of us around the world were doing the ashram thing. Different organisations everywhere. I still teach yoga, have never stopped. My forte really is the deep spirituality of it.

the next Path step

Nearly thirty years ago, I met a healer, who badgered me for three years to become a healer. Grudgingly, I eventually caved, and got thrown in the deep end with people who had all sorts of problems. I wasn't happy seeing people every week for the same thing, it felt as though the healing wasn't really taking place. I felt that the answers to many of our difficulties lay in our past lives. So, I rather quickly started doing this as well. My concern for my clients over rode any insecurities with this, and that attitude has continued to this day.

Along the way, I met someone who asked me if I could do some channelling for him. So, rather innocently, I agreed to try. I am still a medium, just from that man's belief in me, and his encouragement.

But, before that, I had felt for about five years, that I should be learning Maori spirituality, and eleven years ago, I accidently walked into a room in a building one night (I was looking for someone), and there it was. I sat down and joined in. I'm still involved in this wonderful Path. I was immediately asked to come and learn Maori healing the next night. So I did, rather insecure about being able to do it, but hey, I learnt. And I've kept going with this modality ever since.

Of course, with all healing, there is always a particular direction that each person ends up mainly doing. Mine has been with DNA problems - things that have carried on down the family line, such as illnesses, addictions and such. Which goes, for me anyway, hand in hand with past life regression. And I am always focused on the other spiritual aspects too, but whether or not I actually do these things depends on the session's needs.

Naturally, one lives one's own life, too. I am grateful for my life. It hasn't been easy. Not at all. But has always been interesting. I live in a lovely country, have dear close friends, a wonderful family, live in a nice flat, do unusual and interesting things as my Path - who could ask for more?

I would have to say that what I do - yoga spirituality, healing, and clairvoyance, are, for me, magical. I am very lucky.

I know that I'm not the only person who does different things with their life. I'm really interested to hear what others do, too. 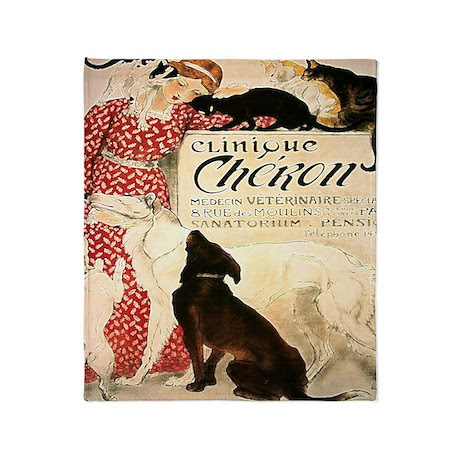 It's not about the money

Truly. It seriously is not about the money I've often wished that I had money to buy expensive skin care and make-up, have hair salon colouring rather than usually doing it myself, have quality shoes, have expensive clothes, the best organic food. But in my heart, I do know that this is not the way to happiness. Nor self-worth. It might make us look and feel good, but, for so many of us, this is just fleeting. We are worth so much more than what money can buy us. I am on a restricted income, and need to have money put aside for all the necessary things in life, like funds for car repairs, petrol, monthly bills, medical, etc, etc. It is much less stressful when money is in the bank to pay for all of these. I feel better when I can put some money aside. It stops me worrying. But, when I am gifted something that I would secretly love, it is so special to me. I'm very lucky having two daughters, one who is older, and the other plus two grand 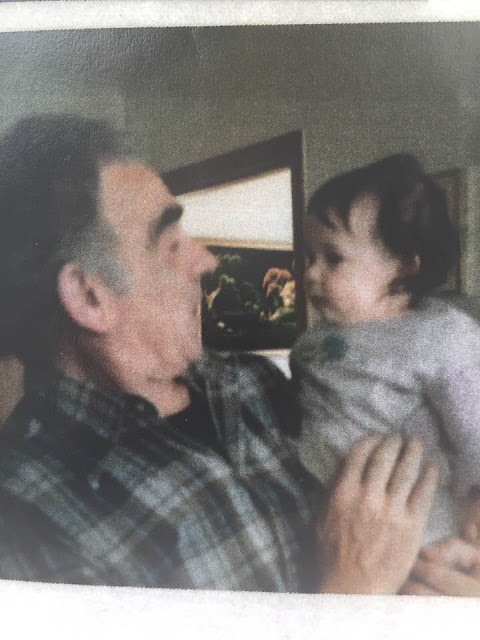 why, oh why, do I always go on about topics like values? - because I get so much positive private feedback about them - that's why Poppa Joe and his first great grandchild, and my first grandchild Values interest me. They really do. My own, and those of others.  When I was a young mum, having problems with someone's judgements and behaviour, especially towards me, I spoke with my step father Joe, about it. I was doing the "why are they doing this to me/behaving like this/saying these things?"  Joe said "but they are just always being true to their self".  Honestly, this was totally the wrong answer for me. I kept whining and arguing about it to him. Which is hard to do when someone is smiling lovingly at you. He repeated it several times. I finally got it. The offender (they were definitely that in my eyes) was consistent with what they believed in. Right or wrong. They were staying true to theirself. This incident and many other similar ones where I waste